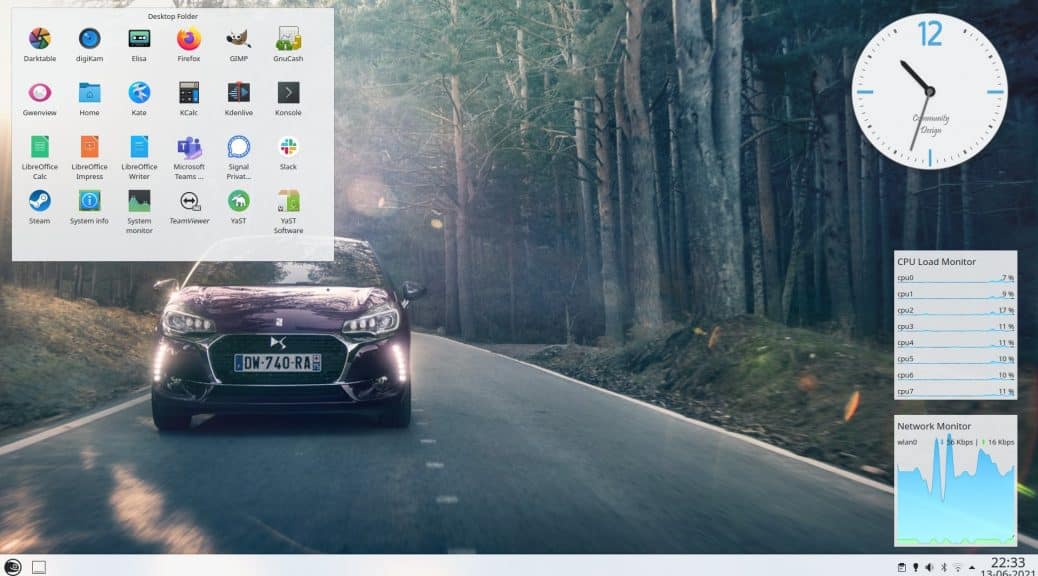 Its interesting to watch Youtube reviews for openSUSE Leap 15.3. One of the main critics is that it doesn’t offer the latest KDE and GNOME desktop versions. “The software is quite old.” Yes, that is not very interesting for a reviewer. Because as a reviewer, you like to point out what is new. And what is exiting. And the goal of openSUSE Leap 15.3 is to not be exciting. The goal is to be stable.

openSUSE Leap and SUSE Linux Enterprise have moved closer together over the last few years. I remember all the effort that has been put into making sure that the codebase for the base packages of openSUSE Leap and SUSE Linux Enterprise were similar. In may 2015 (yes, that is a while ago) Richard Brown announced that the latest SUSE Enterprise Sources where now available in the Open Build Service and he presented the vision for a new stable release version, which would be named openSUSE Leap. But after that, there was still a lot of work. It took a couple of releases (42.1, 42.2, 42.3 and then 15) before the base packages of Leap and SLE were completely aligned. From openSUSE Leap 15 and onwards, SUSE officially supported organizations who wanted to migrate from Leap 15 to SLE 15. And this new release takes that integration even further. From openSUSE Leap 15.3 and onwards, the binary packages of the base of Leap 15.3 and SLE 15 Service Pack 3 will be identical. The packages on top of that base will be ‘community backports’. And these packages will work on both Leap 15.3 and on SLE 15 Service Pack 3.

So you will get a rock solid distribution, because it needs to be enterprise grade. Enterprises don’t have the time, nor the willingness to mess with software. They want to get work done. The software should just work. And that is exactly what you should expect from openSUSE Leap 15.3. This might be a bit boring for a reviewer or for a Linux enthusiast. Because a typical Linux enthusiast wants to try out the latest and greatest software. They want to play around with the new KDE Plasma 5.22 (released on the 8th June 2021). Or they want to play with the new GNOME 40 desktop (released on the 24th March 2021). They can, if they install the latest openSUSE Tumbleweed.

From the table, it becomes clear that some of the bigger productivity applications are kept up-to-date both in Leap 15.2 and Leap 15.3, such as: Darktable, Digikam, Inkscape, Krita, LibreOffice, Firefox ESR, Thunderbird and VLC. openSUSE can still do a better job if they kept GIMP up to date as well, but even GIMP is not too far behind. The point that I like to make is that if you just want to use your computer, openSUSE Leap 15.3 should suffice for that. Not everyone needs the transparent panel functionality that is offered in the KDE Plasma 5.22 desktop. And not everybody needs the new horizontal layout of GNOME 40, when the vertical layout has been refined a lot over the last 10 GNOME iterations. Sure those features are nice to have. But they won’t break the user experience when they are not included. Remember: only a year ago, everybody thought these experiences where the best thing since slided bread.

This time, I have decided to upgrade both my laptop (the HP Pavilion 14-ce0830nd) and my desktop (the HP Pavilion Power 580-146nd). The openSUSE installer did ask me to make some manual choices about package conflicts. That might be the result of me having ~10 additional repositories enabled. So my system is not really a stock installation. Without some technical knowledge, I think the questions on file conflicts are not easy to resolve for a new Linux user. This is also a problem during regular updates, so this is a broader openSUSE issue. The YaST installer just offers too much technical choices. Most of the time, there is only 1 valid option. Yes, please make the required changes; downgrade the package or change the repository. Of course I don’t want to keep a package with broken dependencies. And of course I don’t want to delete the application, which I want to keep using. If YaST just removed those choices, in most cases the user doesn’t have to make any manual changes. End of rant.

On the laptop, I had to make more manual choices and this seemed a more complex installation. After the installation, I had to re-install some packages (gnucash, hedgewars and wesnoth) that were not transferred correctly. And I have also removed all (openSUSE Leap 15.2) packages that were left without a repository. Most of these (library) packages had a more modern version in Leap 15.3, but because the version number is included in the package name (instead of in the version number) they were not removed.

On the desktop, I tried to directly upgrade the system with the proprietary Nvidia drivers, which didn’t work out. I did have a successful installation, but I could only use the command line. After running YaST from the command line and re-installing the Nvidia packages (nvidia-computeG05) and rebooting, my system showed the login screen and my problem was resolved. A lesson for the future: when upgrading, do not enable the Nvidia repository. Install these proprietary drivers after the upgrade. After the installation, I had to re-install the same packages (gnucash, hedgewars and wesnoth) that were not transferred correctly. But now that is all said and done, I am very happy that both my systems are running on the latest and greatest openSUSE Leap 15.3.