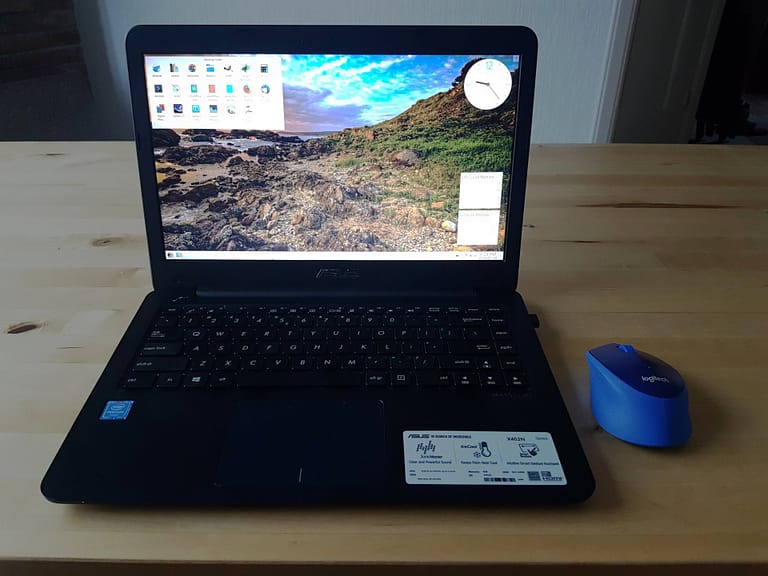 I have recently bought a new 14″ laptop, the ASUS VivoBook X402NA-FA112T as it is called in the Netherlands. On the ASUS.com website, this model is known as the ASUS VivoBook E402NA. Although this is a budget laptop, its a big improvement over my previous laptop (the Acer Aspire One 725). Both machines happily run openSUSE Leap 15. This review provides an overview of the new hardware and how it performs when running openSUSE Leap 15.


The ASUS VivoBook X402NA-FA112T has a matte black plastic body that flexes when you bend it. You will see your fingerprints on the laptop its body. This is especially visible on the track-pad. It is quite light with 1,65 kilos. The screen looks good and has vivid colors. The viewing angles are not great, when you flip the screen, the colors distort. Professional reviewers will probably have more to say on the screen. In my opinion, it looks good when browsing the web, watching YouTube or playing games. The best thing about the laptop is the keyboard. I think that its a very pleasant keyboard with good key-travel and a nice sound when you type. The touch-pad is also very nice. It has a large area and responds well to your finger movements. It allows for multi-finger gestures like two finger scrolling. The touch-pad doesn’t have real buttons. The left click works perfectly, but the right-click sometimes doesn’t register. This is not a problem with the touch-pad, but rather with the length of my fingers, as I regularly hit the touch-pad slightly above the designated area. The speakers are OK. The volume is not very loud, but its enough for filling a small room with music. The speakers don’t deliver any bass. The mid tones sound fine. On the high-end tones, the speakers sound a bit metallic. These speakers are not very good for playing R&B, rap and rock (because of the lack of bass), but they sound fine when playing classical music or pop music. 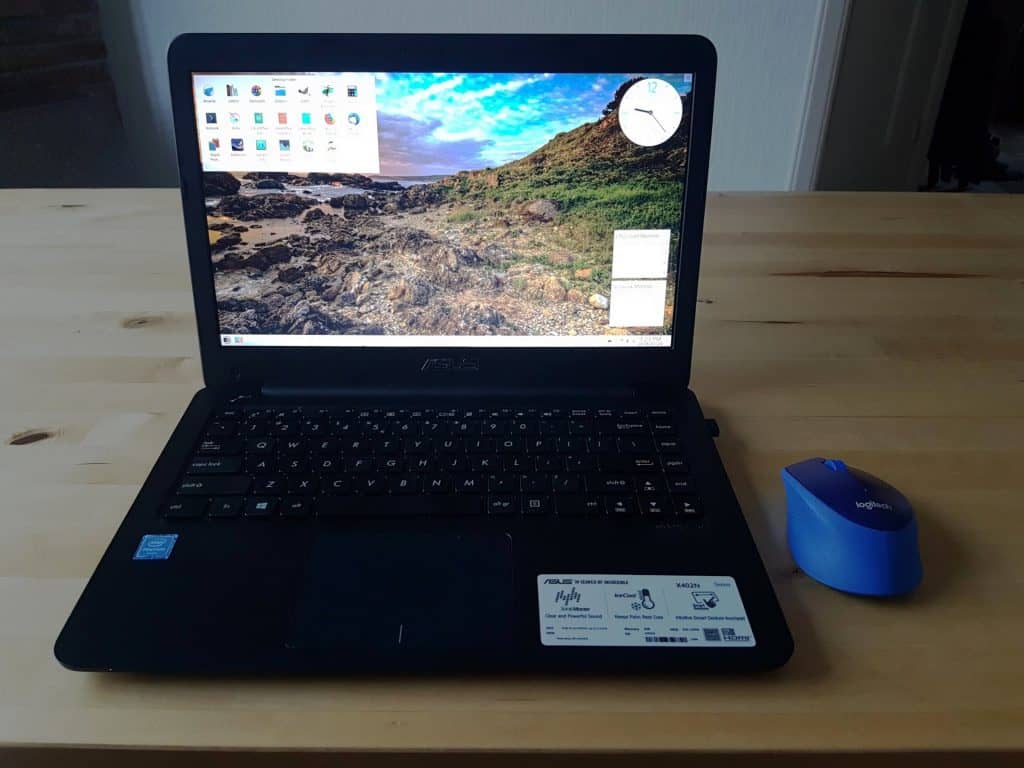 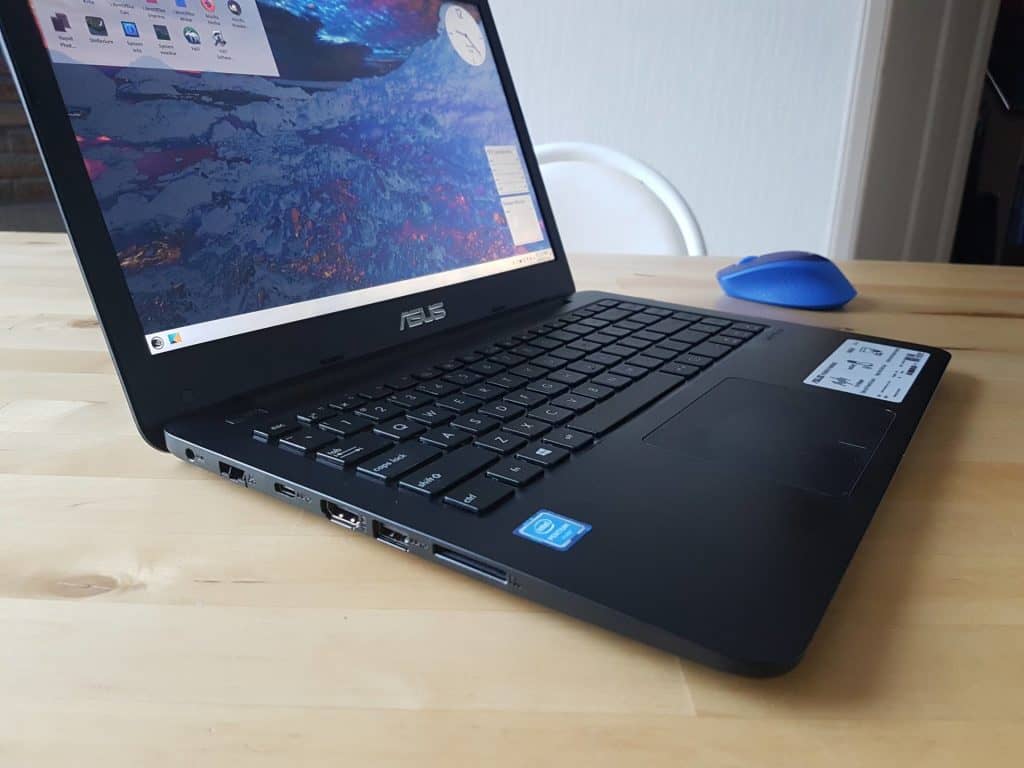 This laptop has great connectivity. It has 3 USB ports, a SD card reader, a HDMI port and a LAN port. I don’t think you can ask for more. And best of all, the USB type C port is not used for the power adapter. Instead, this laptop has a separate power connector. (The downside is that its simply not possible to charge via USB type C.)


The battery is not very good. Its only a 2 cell battery and will last around 3 hours. If you use the laptop for gaming, the battery will empty much quicker. This laptop will serve you well if you work from home, from an office or from a coffee shop (Starbucks / Coffee corner) where there is an ability to connect to a power source.


For benchmarks, I always look at the benchmark scores on the websites: cpubenchmark.net, videocardbenchmark.net and harddrivebenchmark.net. In the table below I compare the ASUS VivoBook X402NA-FA112T with my previous laptop. The new laptop is 4 times more powerful than the old one, so that’s a big improvement for me.

I have installed openSUSE and it runs without any problems. I installed it without turning off secure boot. It automatically asked me to add the openSUSE key. WiFi worked out of the box. The touch-pad works without issue. However, that is not to say that there is nothing to improve. When trying out the gaming capabilities, I noticed very low frame-rates. When looking into the issue, it became clear that openSUSE Leap 15 doesn’t install the xf86-video-intel driver by default. This is easily remedied by searching and installing this driver via YaST and rebooting.

As stated before, I tried running some Open Source games on my new laptop. This is certainly not a gaming laptop, but Open Source games are not very demanding. I tried OpenArena, Xonotic and SuperTuxKart. Both OpenArena and Xonotic performed admirably. The frame-rate ranged between 30 and 60 fps, mostly hovering around 45 fps. SuperTuxKart doesn’t run well. In full screen mode, you really need to turn down the graphic fidelity. And even in a smaller (1368 x 768) windowed mode, the frame-rate still ranged between 15 and 30 fps.

The ASUS VivoBook X402NA-FA112T is a good machine for tasks like web browsing, document editing or photo editing. However, it doesn’t like to do all these things at the same time. For fun, I tried opening Firefox, Dolphin, Gwenview, Darktable and LibreOffice Writer, while playing music with Amarok in the background at the same time. The image below shows the result. The laptop needed some time to work out all these things at the same time (and was not responding in the mean time). After all programs were running, the CPU load decreased and continued to hover around 40% on all 4 cores. Even though this is a quad-core machine, it definitely has more difficulty running all these programs than my desktop PC, which has an Intel Core i5 4200u CPU. Interestingly, 4GB of memory was enough to handle all of these tasks.

Its very clear that the ASUS VivoBook X402NA-FA112T is not a gaming rig. So what if you want a bit more performant hardware? There are several companies that sell laptops with Linux pre-installed. Most of them include the Intel i5-10210U and the more powerful Intel i7-10510U CPU, combined with the integrated Intel UHD Graphics. These are: Dell XPS 13 Developer Edition, Entroware Apollo, Slimbook PRO X and the System76 Galago Pro. One step up are the Entroware Kratos laptop, the Slimbook Pro 15 X or the System76 Gazelle, which have a dedicated Nvidia GTX 1650 GPU. All of these laptops are way more expensive (> €1.000) but do have a better build quality and a better CPU and GPU.

These laptops have much better multitasking capabilities. As you can see from the benchmark scores in the table below, these laptops will satisfy high-end Linux gaming needs. These CPUs are on average 3-4 times more performant than the Intel Pentium N4200. Although the Intel UHD GPUs are 2 times more performant than the Intel HD Graphics 505, it is still not great for gaming. The laptops with the Nvidia GTX 1650 definately are.

Would I recommend the ASUS VivoBook X402NA-FA112T? That depends on your use case. This laptop is a good pick if you use it mainly for web browsing, document editing or photo editing. The keyboard is great and touch-pad works well. There are loads of ports (3x USB, SD card reader, HDMI, LAN). CPU performance is good enough. Sound quality is average. openSUSE Leap 15 runs well, as long as you keep the multitasking limited to 3 or 4 programs at the same time. WiFi works out of the box. Light 2D games will work fine. But light 3D games will max out the GPU, even with the graphic fidelity set to low. And you need to make sure that you have a power outlet nearby at all (or at least most of the) times. Because the battery will only last for 3 hours. One big advantage of the ASUS VivoBook X402NA-FA112T is the price. In the Netherlands this laptop retails (currently) for €505. It might not be the best 14″ laptop on the market, but it does offer enough bang for your buck.