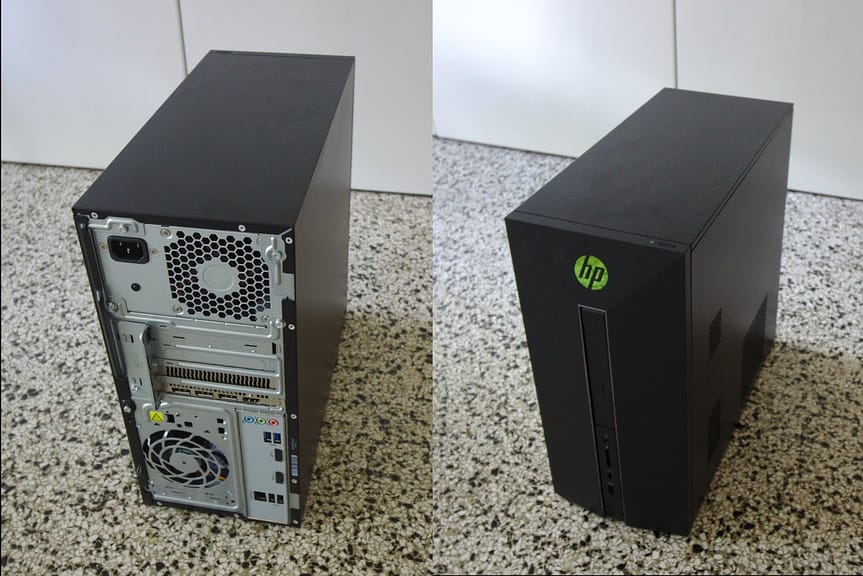 Because of the incredible bargains during the Steam summer / winter sales, I have acquired 42 games over the last 6 years. My old openSUSE system was never able to play these games in a decent manner. Intel HD Graphics 4000 will only get you so far… I have looked into building a new AMD PC, which would allow me to run Linux / Steam games at high settings and 1080p. Recently I noticed a promotion for the HP Pavilion Power 580 desktop, equipped with a Ryzen 5 1400 processor and with a Radeon RX 580 graphics card. Heavily reduced in price. So I took the plunge and got myself a brand new desktop PC. 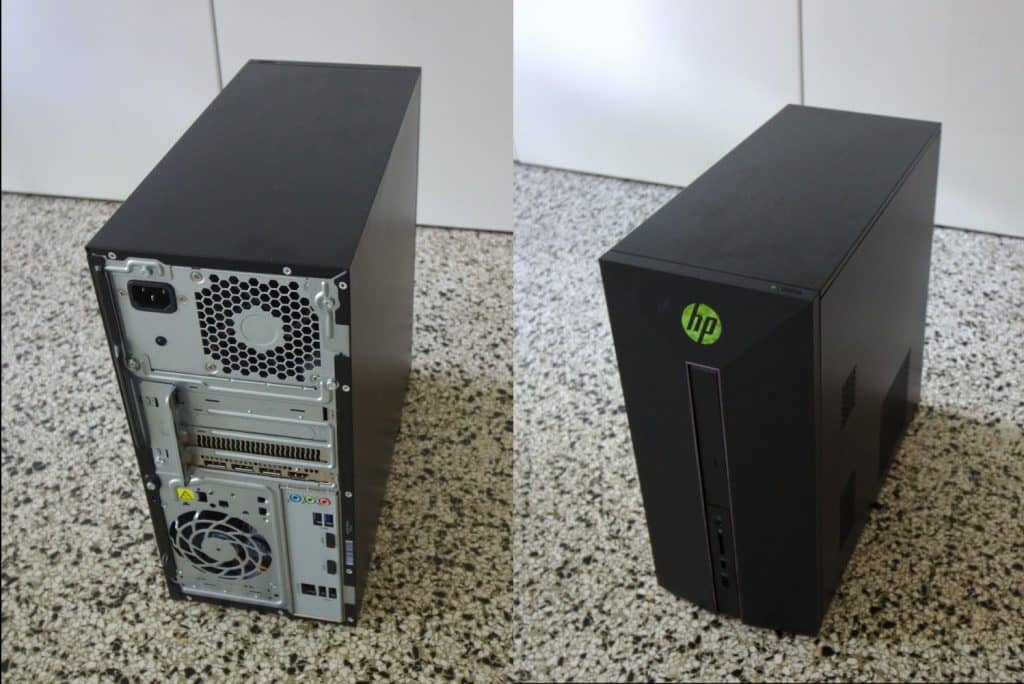 The case of the HP Pavilion Power desktop looks pretty good. Its a very small case: 36.4 cm in height, 16.5 cm in width and 37.8 cm in depth. The front has some sharp triangular edges that make the desktop pleasant to look at.

One issue with the case is airflow. There are 2 side vents in this case. The fan in the back of the case blows in cool air. This is used by the processor cooler and hot air will immediately move out of the case. Which means the CPU is adequately cooled. The graphics card also gets cool air from below, but dispenses this air to an area where it cannot easily get out of the case. It needs to find its way out towards the top side vent located far to the left. It would have been better if there was an air vent directly in between the graphics card and the power supply. On the front side, there is a DVD re-writer, a SD-card reader, an USB 3.0 type-C port, an USB 3.0 type-A port and a headphone jack. So this case is very well equipped from the front to handle all your media. The backside of the case is less prepared for the job. It has 2 USB 3.0 ports and 2 USB 2.0 ports. It has the regular ports for audio in, audio out and microphone. The graphics card provides 1 HDMI port and 3 display ports. And it has an Ethernet port. I think that there are not enough USB ports on the backside. I have a wired keyboard and mouse that take up the two USB 2.0 ports. Which leaves me with 2 USB 3.0 ports for everything else. To combat this issue, I have connected a TP-Link UH700. Which provides me with 7 additional USB 3.0 ports.

The power supply is a 300W and its 80 plus bronze rated. It is sufficient, but I would be more comfortable with a 450W or a 550W unit. That would give the machine a bit of headroom.

For benchmarks, I always look at the benchmark scores on the websites: cpubenchmark.net and videocardbenchmark.net. In the table below I compare the HP Pavilion Power 580-146nd with my previous PC, the Zotac ZBOX Sphere OI520. The CPU of my new desktop is 2,5 times faster then the CPU in my previous PC. The GPU is a whopping 18 times faster. So that means that this new PC will provide me with a big increase in overall performance.

I have wiped Windows from the system and installed openSUSE Leap 15. The installation went without a problem. However, there were some annoyances to resolve directly after installation.

The biggest one is sound. I hit an issue where the speakers ‘pop’ every time that a new video (YouTube) or new audio file (Amarok) started playing. This loud ‘pop’ was very annoying and not good for my speakers. I am not the first person to encounter this issue, as it was also posted on the openSUSE forms. The proposed solution by John Winchester resolved this issue for me. I now only hear this ‘pop’ during the startup of my PC.

Another issue is that my Bluetooth adapter is not recognized. I have installed the bluez-auto-enable-devices and bluez-firmware and bluez-tools. If I run the command “sudo rfkill list all”, it does find the Bluetooth adapter and indicates that it is not Soft blocked and not Hard blocked. But according to the KDE Plasma 5 desktop applet, no Bluetooth adapters have been found.

Furthermore the amdgpu-pro driver is not yet available for openSUSE Leap 15. The open source AMD driver is performing okay. But I did hit an issue where I cannot get the display to turn on again, a few hours after it was (automatically) switched off. This could very well be related to the graphics driver. I have now configured my PC to suspend after 3 hours. When I restart the PC from this suspended state, I don’t encounter this problem.

This is the area where my new PC excels! I can run all games on very high settings and get frame rates higher than 60 Frames per Second. I would have expected some higher frame rates from the open source games that I tested. Some of these games are not very graphically intensive. But even with the RX 580, the frame rates are just good, but not great. The exception is Xonotic, a super fun FPS that not only looks great, but shows very high frame rates. And I must say that SuperTuxKart looks amazing with all settings at the highest level (6). I have listed the frame rates that I see on average below:

I can now play games on Steam that I couldn’t play before. I play these games on very high settings and 1080p. The frame rates are good, certainly considering the advanced graphics of these games. I have listed the frame rates that I see on average below:

The HP Pavilion Power 580-146nd is a great multitasking machine. For fun, I tried opening LibreOffice Writer, LibreOffice Draw, Darktable, Amarok, Dolphin, Dragon Player, GIMP and Steam at the same time while playing music in Amarok. Programs opened instantly and the CPU cores / threads used very little of the available CPU power. In the future, I will use this desktop for testing various Linux distributions on Virtualbox, for developing photo’s with Darktable and for making movies with Kdenlive. So I will use a bit more of the available power. For ‘normal’ desktop usage this machine has plenty of power to spare.

The HP Pavilion Power 580-146nd packs a lot of power for a price that is hard to match when building your own PC. However, it might surprise you that I would not recommend this exact machine to others. The reason is that Nvidia cards are still better supported on openSUSE Leap 15. I feel that for most people, the HP Pavilion Power 580-037nd would be the better choice. This machine features an Intel i5-7400 CPU, a Nvidia GeForce GTX 1060 GPU and has 8 GB of RAM. The pricing is very comparable. And the outside of the machine is the same.

For me personally, this machine was absolutely the right choice. I am very interested in the AMD Ryzen CPU’s. I also like AMD’s strategy to develop an open source driver for its GPU’s (amdgpu) for the Linux kernel. I was looking for an AMD machine and this HP Pavilion Power 580-146nd fits the bill and then some.