Software centers have become very important. Linux was the first place where you could install and update all software in one place, by using package managers. In openSUSE that central place is the YaST Software Manager. Other distributions, such as Ubuntu, used applications like the Synaptic package manager. The user experience of these package managers is not very user friendly, as they show many technical packages / details, which most users will not understand.

In 2008, Apple introduced the iOS App Store. This changed the public perception on how software centers should work. Everything was now in one place, neatly organized into categories. The screenshots, descriptions and ratings made it easy to learn about new software. And installation was a breeze. Google followed this trend by announcing Android Market later in 2008. Apple introduced the App Store for Mac OSX in 2010. Google re-branded the Android Market in 2012 to Google Play store. And in the same year, Microsoft introduced the Windows Store for Windows 8. This store was re-branded in 2017 to the Microsoft Store.

Within the Free and Open Source Software (FOSS) world, Canonical was the first player to embrace this trend. They developed the Ubuntu Software Center and released it in 2009. The Ubuntu Software Center had the same features that made the iOS App Store great. After 2 years of steady development, the development pace slowed down. And more and more media outlets voiced their concerns on the lack of new features. They didn’t keep up with the big players anymore.

In 2013, the GNOME project released the GNOME 3.10 desktop environment. This included GNOME Software, an application for finding and installing applications. It was their version of the software center. And over the last 5 years it has been steadily developed. The pace hasn’t slowed down. You can now use it to install Flatpak applications. And in Fedora, it can now even be used to update the BIOS.

KDE was relatively late to the party. In 2015 KDE included the Muon package manager as part of the Plasma 5 desktop environment. Over the last few years, the user interface has gotten a big overhaul and Muon has been re-branded to KDE Discover. After having installed openSUSE Leap 15, I was very interested to see if KDE Discover worked as intended and could live up to bar set by the competition.

The first thing I noticed when opening KDE Discover, was that KTorrent was not installed on my machine. As this is a very nice program for downloading Linux ISO’s or video podcasts (shout-out to Jupiter Broadcasting), I decided to install that one first. After pressing the install button, the software downloaded. I clicked the Install button again and it gave me an error. Package not found (see below). I still liked to install KTorrent, so I opened the YaST Software Manager and installed KTorrent without any issues. 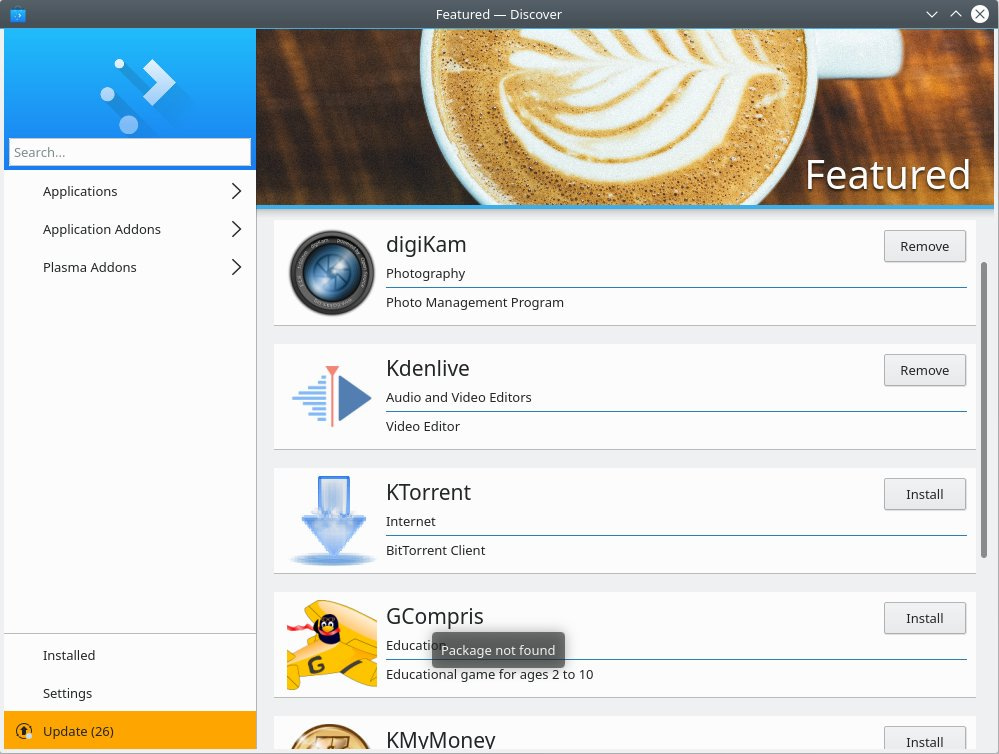 My next attempt was TuxGuitar. This is a fun application that makes playing music easy by showing the music score, playing the music as a midi file and scrolling along with the progress of the song. You hit the install button and it starts downloading. One of the strange behaviors of KDE Discover is that while displaying the search results, it continuously shows that it is still looking.

I hit install for the second time and this time it gave me a very strange warning. I needed to remove a variety of games and KDE applications before I could install TuxGuitar. I clicked cancel to see if this warning was also present in YaST.

I searched TuxGuitar in YaST and checked the box to install it. No errors. To be sure, I did an additional check on missing / problematic package dependencies. There were none. I installed the software without any issue using YaST.

The third attempt. I knew that KWrite was not installed by default in openSUSE Leap 15. The more powerful application Kate is the default text editor. So I tried installing Kwrite. I used YaST in advance to check if there were any package dependencies. YaST indicated that no additional software packages needed to be installed. I closed YaST without installing Kwrite and opened KDE Discover. This time, KDE Discover was able to successfully install Kwrite.

Another new functionality of KDE Discover is the integration with the KDE Store. The KDE Store is a place where new wallpapers, new icons and new themes can be found and installed. I decided to look for and install a new wallpaper. You can do this by clicking on Plasma Addons and then on Wallpapers. You can search within the wallpaper section, but there is no possibility to sort the search results. This is too bad, because other area’s of the Plasma desktop do have that functionality. When you right-click on the Desktop (context menu) and go to “Get New Wallpapers” you can order the search results on Newest, Ratings and Most downloads.

I decided to install Vivid Coast 4K. I hit install and this completed without any issues. I noticed that you can now view the Wallpaper by means of clicking through an image gallery. This looked very slick.

In the end, I am disappointed with KDE Discover. It works for simple installations, but it cannot handle complex scenarios. The integration with the KDE Store works well. At the same time I miss the option to sort the search results. These features are now taken for granted in other App Stores. KDE Discover still has some ways to go. Because of that experience, I wanted to compare it to GNOME Software. I used KDE Discover to install GNOME Software. This went fine, which surprised me, as YaST (which I checked in advance to see if there would be any package dependencies) indicated that many additional software packages were needed.

Is GNOME software better equipped to handle software installation on openSUSE Leap? I started GNOME Software and immediately encountered an error. I looked up the error online and found that this error is caused when Steam is installed without GNOME Software. The easy fix was to remove and reinstall Steam. The removal / installation process went fine. And the error was gone as well.

So let’s start with the real testing. I prepared a test by removing the Kdenlive video editor with the help of YaST. I started GNOME software and looked for Kdenlive. To my surprise, GNOME Software couldn’t find it at all.

The second test was installing TuxGuitar. To make it a fair comparison, I needed a (clean) situation where the previously installed software dependencies were still missing. I decided to test this on my Virtualbox installation of openSUSE Leap 15 with the GNOME desktop. I prepared the test by installing a bunch of the applications (Krita, KStars, Scribus) that caused problems during the KDE Discover tests with help of YaST. After that, I started GNOME Software and looked for TuxGuitar. No results.

The third test was installing Kwrite. This test was also conducted on my Virtualbox installation of openSUSE Leap 15. Luckily GNOME Software managed to find Kwrite and install it. Not totally without issues, as GNOME software did display an error. Whatever went wrong didn’t prevent the installation, so this error seemed a bit out of place.

I am a longtime openSUSE user. For me, using YaST has become second nature. However, many new openSUSE users (for instance distro hoppers who started on Ubuntu) will look for a software center / app store to find and install applications. I have encountered many issues during my testing. New users who are trying out openSUSE for the first time might decide to move on to other Linux distributions when they encounter these kinds of issues. Which is too bad. Because if they would stick to YaST Software Management or to installing via the command line with Zypper, they would have a very different experience. I hope this blog helps to raise awareness within the openSUSE community. Because fixing these implementation details is important to the overall experience of a high quality distribution.

The latest KDE Plasma 5.13 release includes a huge (137) number of fixes for the Discover application. This fixes my complaints on the sorting of the results (see this picture). These features will land in a future openSUSE Leap release. So for Leap 15, I would recommend everyone to stick to YaST for installing software.

For both KDE Discover (1) and GNOME Software (2), I have filed bugs on the openSUSE bugtracker.