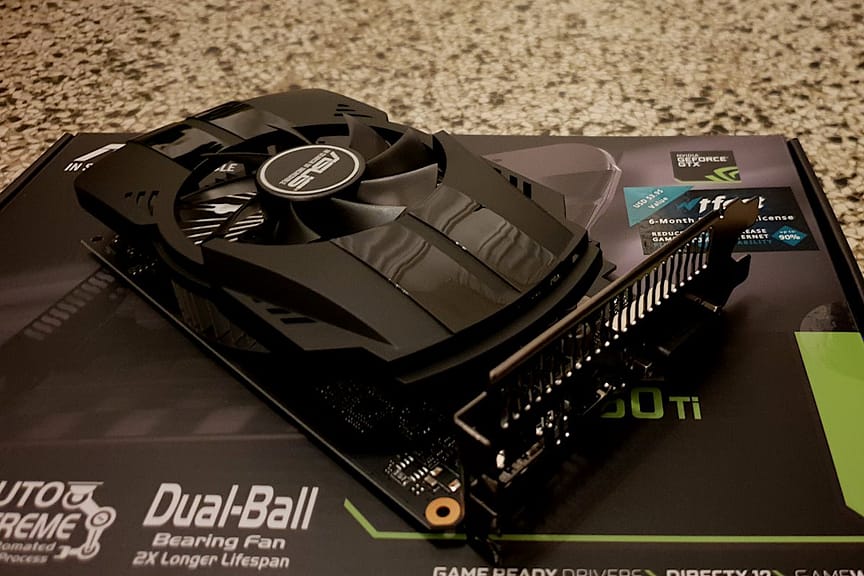 In my latest article on upgrading to openSUSE Leap 15.1 I had experienced issues with my graphics card, an AMD Radeon RX 580 8GB card. The drivers were not working, which resulted in a black screen during the upgrade process. I could work around this by using nomodeset, but that essentially meant that I wasn’t using my midrange graphics card at all. I have bought this HP Pavilion Power 580-146nd especially to be able to run my Linux / Steam games at high settings and 1080p on my openSUSE system. So not having my graphics card working wasn’t an option. I could have switched to another Linux operating system. And for a short period I considered switching to Pop!_OS, but I am still very fond of the openSUSE operating system and the KDE Plasma desktop.

I needed to consider a different solution. In my past experience, NVIDIA cards have always performed very well with openSUSE, when using the proprietary drivers. Another benefit of going with NVIDIA was the lower power consumption. And a third benefit was that I could purchase a graphics card with a DVI output. I considered buying the GeForce GTX 1650 or the GeForce GTX 1050 Ti. Both cards have a recommended 300 watt Power Supply Unit. Which is exactly the PSU that is residing in my HP Pavilion Power. The 1650 is the newer card, which could mean that the drivers are not fully developed for Linux. So I decided to go for the somewhat older, but not much slower 1050 Ti.

This card was pretty easy to install. The card didn’t need additional power, in contrast to the Radeon RX 580 which used a 6-pin connector.

After installing the card, it was time for action! I plugged in the openSUSE Leap 15.1 USB thumbstick and waited for an installation screen. And lucky enough, my plan worked! Leap 15.1 recognized my new GPU and I proceeded with the upgrade of my operating system. I won’t cover all the details here, as I have detailed the upgrade process in my previous post.

After installation, there was still the issue of installing the proprietary NVIDIA drivers. For this, I first needed to add the NVIDIA repository. This is very easy. Just type ‘Repositories’ in the launcher menu and click on ‘Software Repositories’. Then click on ‘Add’ and put in the details of the NVIDIA repository. Furthermore, you need to trust the GnuPG key of this repository, to indicate that this is a trusted source.

After adding the repository, you can click ‘Finish’ and exit the Software Repositories tool. Now type ‘Software Management’ in the Launcher menu. This will launch the Yast Software Manager. The proprietary drivers will already be selected. Click on ‘Accept’ and then also ‘Accept’ all prompts to agree with the proprietary licenses. The installation will commence shortly afterwards.

After the installation I did encounter some strange behavior. My desktop looked like it was scaled x4. This was caused by a problem with my HDMI cable. As soon as I swapped this cable for a DVI cable, my settings were restored to normal. As shown below in KInfocenter, the proprietary drivers were installed as intended.

The last thing I wanted to try out was how my games performed. I have launched a couple of games:

I was able to upgrade to openSUSE Leap 15.1 and I am again able to play my games in high settings on 1080p with good framerates. I am very pleased with my decision to go with the NVIDIA GeForce GTX 1050 Ti. Having a DVI output was a life saver for me. Otherwise I still had to struggle through all kind of weird HDMI issues. I did sacrifice some GPU power, but the NVIDIA GPU is a better match for the system as the HP Pavilion Power only has a 300 watt PSU. The NVIDIA GPU will most likely run cooler and will make the system more quiet overall.

This experience did remind me that going with Linux / openSUSE can still cause some difficulties, because of hardware support. In my opinion, going with NVIDIA is the safer option at this moment when running openSUSE Leap.