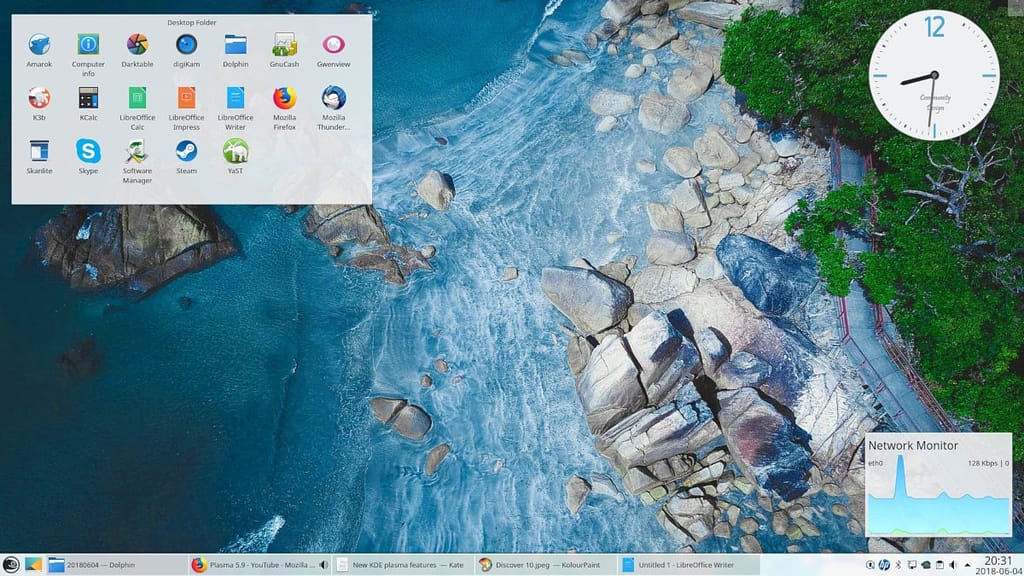 One of the most exiting new things about openSUSE Leap 15 is the updated KDE Plasma desktop environment. We are moving from Plasma 5.8 LTE to Plasma 5.12 LTE. Which means that there are a lot of new features to look forward to. Lets start with emphasizing that the KDE Plasma 5.12 desktop environment looks stunning. Below is a screenshot of my personal desktop, fully configured to my personal preferences. My configuration hasn’t changed much since KDE Plasma 4.3. I use 3 widgets: a folder view, an analog clock and a network monitor. 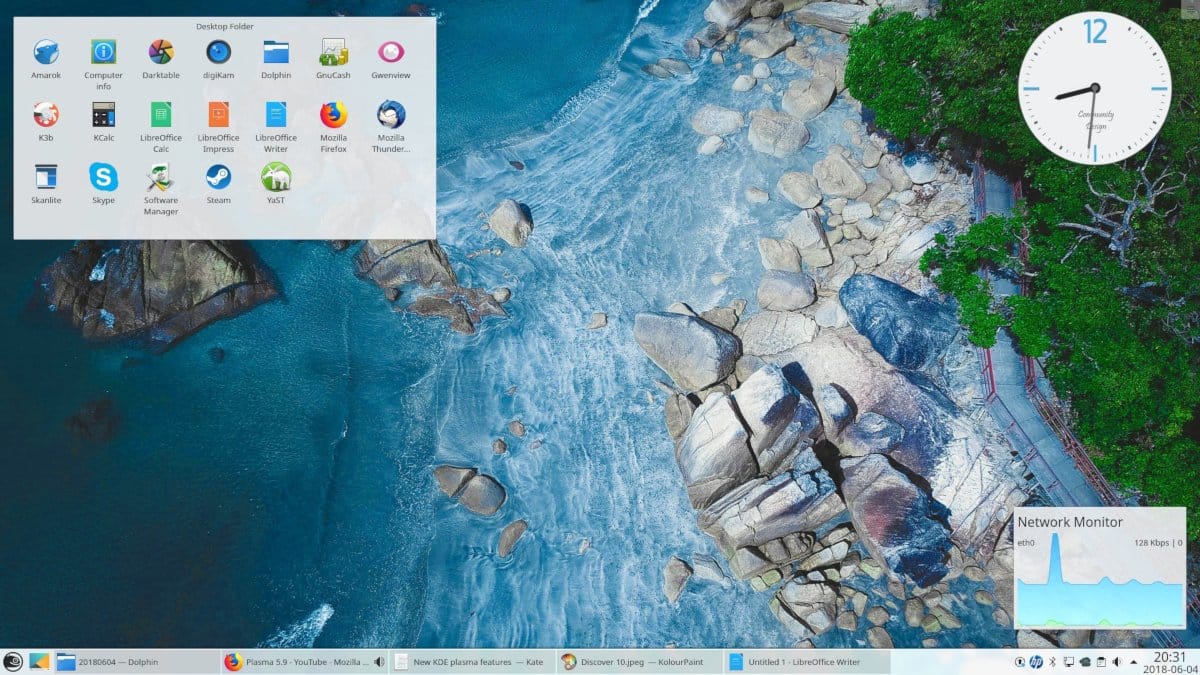 The Plasma desktop environment has a new default desktop that uses the Folder view. This means that just like Windows, you can place all your icons on your Desktop. This change recognizes that most people stick to old habits. It might not be the best choice from an aesthetic point of view, however it is the best default to implement.

The second improvement is the ability to control your media from the lock screen. This only works with the traditional media players. So you can’t control music playing in your browser.

The task manager has received a lot of attention in the last few releases of the Plasma desktop. Two features deserve your attention. The first improvement is the ability to mute applications from the taskbar. This is really nice for quickly muting a browser playing videos.

The second improvement is the addition of jump lists. This is a very welcome feature. For instance, it allows you to quickly open recent documents from LibreOffice.

The second nice feature is that when you save a screenshot (using Spectacle), you can now perform various actions from the notification screen, like open the containing folder or open the image with Gwenview.

The application launcher has 3 different appearances:

The application dashboard is a full screen application launcher that has been polished in the last few releases. This is an alternative to the Windows 8/10 full screen start menu or to the Apple MacOS full screen dock. The last time I tested this feature, it was quite buggy. But (based on my recent testing) it is now behaving properly.

The second option is the application launcher that behaves a lot like the Windows Vista start menu. All menus open within the same area (click-through). However, this application launcher is way better than the one from Windows Vista. It’s much more powerful as it uses the Krunner search back-end to quickly provide you access to your applications, locations and files. Type something into the search window and it will find it on your computer.

One of the nice improvements is that you can now easily decide which tabs you like to use. So if you want to remove the Favorites section, you can just drag this away in the settings.

The third application launcher is my personal favorite. Its the one with pop-out menus. This is a very basic launcher, but it has the same powerful search capabilities. Favorites are listed as icons on the left side. And there are also lists with recent applications and recent documents.

A new feature is that when you remove all favorites, the menu is hiding the favorite section for a very minimal appearance.

You can adjust this by clicking on Configure and then selecting the Sidebar view.

There are 2 applications that deserve an in-depth look. The first one is Discover, the software center of KDE. Discover wasn’t well integrated in the previous openSUSE Leap release. So I had high hopes for this release. The second one is KDE Vault. This is a method to create an encrypted folder on your computer to store files that you don’t want other people to access / see. I have tested both applications.

I am disappointed in Discover. Of the 3 applications that I tried to install, only the last one went without a problem. And these problems are not present when installing the same applications with the YaST Software Manager. You can read about these problems in a separate blog post.

KDE Vault works as advertised. I can imagine that users find a use case for this application. The only problem that I encountered was that once you create a vault, you cannot delete it anymore. This is unfortunate, as I didn’t have a use for my Test vault. One remaining note is that it isn’t installed by default on openSUSE Leap 15. To install it, use the YaST Software Manager and search for plasma-vault. YaST will automatically install all needed dependencies. I will create a separate blog post that describes how to create a vault.

The last improvements that I like to discuss, are the improvements to Wayland. Wayland is the new display protocol that will replace the 30 year old X.Org display server. Wayland is secure by design and X.Org is not. However, this is a big transition. Functions like print screen and remote desktop sessions need to be implemented in a different manner. There are still unsolved issues with the KDE Wayland implementation. One of them is that Wayland doesn’t play nice with the proprietary Nvidia driver. So its a work in progress. But KDE Plasma 5.12 makes big improvements in this area and I applaud the developers for their hard work. If you are not using proprietary GPU drivers, you can try it by changing the session to KDE Wayland at the login screen. Just don’t be surprised when something goes wrong. openSUSE Leap 15 makes the right choice by selecting KDE on X.Org as the default.